The buyer’s journey is the path a potential customer goes through before making a purchase. For several years, it was defined as a linear funnel where consumers went through different stages, such as discovery, interest, consideration and finally purchase.

Mass media was used to boost sales, and demographic data served as a basis to estimate demand and guide advertising campaigns. Consumers had a more passive role in the process and were heavily influenced by advertisements and professionals placed at the point of sale.

This scenario has changed completely today. Decision making is influenced by multiple points of contact, and the journey, despite still having the same funnel stages, is no longer linear.

It is increasingly common for customers to get to a store (physical and/or virtual) knowing exactly what they want. The old saying, ‘I’m just browsing’, so commonly heard in physical stores, is now part of e-commerce too – literally. In both cases, if there is any kind of friction (a broken link or an over-the-top seller), the journey is interrupted.

Figure 1 shows how modern consumers spend much more time researching a brand or product before making a decision:

This data shows that conversion can occur at any time during the journey and that it’s never the same: consumers behave differently in every purchase.

Focus on the buyer

Companies that want to exceed their goals have made their basic principle to place consumers as the core of their strategy.  The old sales funnel now takes on new formats, and the user experience must be taken into account when communicating with consumers, who prefer to engage with relevant brands that offer useful content.

Understanding what triggers someone to buy a new product or service is essential to optimise campaign results. More than ever, customers look for assertive communication and customised service.

Companies need to include in their daily routines structured processes, marketing techniques and robust tools whose focus is to increase reach and improve performance of their messages. This will enable a deeper understanding of the offer and, consequently, better results.

It is worth mentioning that if a buyer’s journey is omnichannel, the Communication and Marketing strategy must also be. Only companies that already have an established digital maturity are able to move seamlessly between the online and offline worlds to seize all possible opportunities. If your company is still in its infancy, it is time to rethink your strategies.

In this transformation process, you can count on our team of specialists, strategists and consultants to achieve the best performance results.

Contact us to learn how we can transform your business! 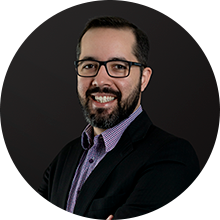 Over 10 years experience in the e-commerce and digital marketing field. Graduated in Computer Engineering.